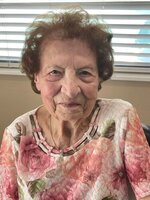 Alma Francis Oelschlager (née Wilson), 97, passed away peacefully in her sleep Monday, June 13, 2022 in Bradenton, Florida. Alma was born April 11, 1925 in Asheville, North Carolina and grew up in Aurora, Indiana with her mother Iona Wilson, later moving together to Miami, Florida and attending high school there, playing the saxophone in the school band. After high school, she worked as Secretary to the Vice President of the First National Bank. While attending one of the USO dances with girlfriends, Alma met and later married Albert Oelschlager, a young and handsome US Army Air Corps officer. A year later in 1947, while living on MacDill AFB, Tampa, the same year the USAAC became the US Air Force, they had their first child, a son, Alan. Taking in stride their life serving the Air Force, they lived together in many locations, as Clark AFB, Philippines, Tinker AFB, Oklahoma, Keesler AFB, Mississippi. Other locations were temporary for schools and training including Frankfort, Michigan, where Alma and Al had their second child, a daughter, Alene. At times there were isolated tours for Al, in which she and their children would stay in Indiana with Alma’s mother. Though Alma and Al were apart, their love remained strong, strengthened by daily airmail letters. Alma and Al’s last assignment was at Chanute AFB, Illinois where Al retired and they moved to Orlando, Florida in 1961. In Florida, they had a happy life, raising children, and Alma remained at home as a very special homemaker. Al was too young and did not want to retire and so, went to work for the US Post Office. Alma was always there to see the children off to school and to welcome them home each day and to participate in the schools’ PTA’s, taught children’s Sunday School and loved to play the organ! After the children were grown and left home, Alma and Al worked hard to keep a beautiful yard and do projects around the house. They traveled to Arizona where grandson, Michael was born and again to Germany, for the birth of granddaughter Candida, to Miami for the birth of grandson Keith, and finally to Nevada for the birth of last granddaughter Kathleen, and soon after to Arizona to meet daughter-in-law Lisa Oelschlager and grandchildren Christopher and Dana. Alma and Al had 57 wonderful, blessed years together. Alma was preceded in death by her husband Albert Carl Oelschlager, son Alan Lee Oelschlager, and son-in-law Richard Armand Gauthier. Alma is survived by her daughter Alene Patricia Gauthier; daughter-in-law Lisa Oelschlager; grandchildren Michael Oelschlager, Candida Gauthier & (Neal Williams), Christopher Hutcheson, Dana & (Matthew) Watkins, Keith & (René) Gauthier and Kathleen Gauthier & (Sae Brimdal); great-grandchildren Rebecca & (Matthew) Sindle, M. Adesso, Ashley Oelschlager, Joshua Oelschlager, and great-great-grandchildren Nathan Bennett, and Matthew and Gabe Sindle. Visitation will be held Monday, June 20th, 2022 from 10:30-11:00 AM and will be immediately followed by the funeral service at 11:00 AM at Griffith-Cline Funeral Home, 720 Manatee Ave. W., Bradenton, FL 34205.