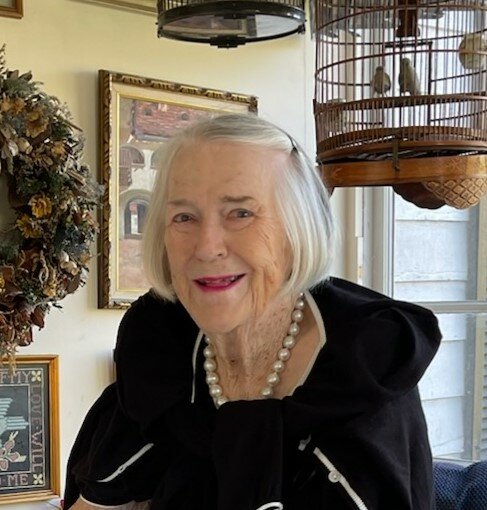 Eileen Watts Griffith died on Sunday, December 18, 2022, in Bradenton, Florida at the age of 98 in her home of sixty years, with family at her bedside.

Eileen was born on December 3, 1924, in Columbus, Ohio, the daughter of Kenneth Milton Watts and Virginia Belle Watts.

She was raised in Columbus and attended Ohio State University. During World War II, she served her country in the capacity of Naval Junior Cadet Nurse. After the war, she graduated from White Cross Hospital School of Nursing in Columbus.

She and her dear friend and fellow nurse Ritchie Richardson traveled together to Florida in 1947. They found Bradenton much to their liking, and Eileen took a nursing job at the Manatee County Hospital.

Eileen soon met the love of her life, the late Oscar Marvin “Buster” Griffith. They were married on March 26, 1949. They were two months short of their 73rd Anniversary when Buster died in January 2022. Theirs was a storybook marriage.

Eileen loved her husband, her children, her grandchildren, and her great-grandchildren, and they were devoted to her. She was known to them as Grandmother. She loved every minute of time in their company and they in hers. She was special, truly a ray of sunshine. All can hear her ringing voice as she entered a room, “Well, hello everyone!”

Eileen counted her friends as extended family. She never met a stranger and was always delighted to make them her new friends. Her address book overflowed with companions.

She loved her church, Christ Episcopal, for which she served as 50-year member of Saint Ann’s Circle and as a Sunday School teacher. It is fitting that she died on the Lord’s Day.

Eileen and Buster were faithful fans of University of Florida Gators Football, being season ticket holders for sixty years. When not in attendance at home games, they rarely missed any televised Florida Football games.

She has been preceded in death by her parents Kenneth and Virginia Watts; her husband Buster Griffith; and her brother Ralph Allen Watts.

Funeral service is at one o’clock on Thursday, December 29, at Christ Episcopal Church, 4030 Manatee Avenue West.

The family requests in lieu of flowers that memorials be directed to Service Club of Manatee (https://www.manateeserviceclub.com/) and Entre Nous (https://www.entrenousmanatee.org).

To send flowers to the family or plant a tree in memory of Eileen Griffith, please visit Tribute Store